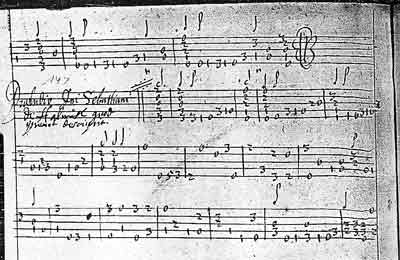 At present I am working on an article for a large audience, which will be published in the new guide of the moated castle Hallwyl (near Seengen at the Hallwil Lake, canton Aargau) in 2003. A detailed article for connoisseurs and fans of lute music is also being prepared and is supposed to be published in the Jahrbuch der Deutschen Lautengesellschaft VII (yearbook of the German Lute Society) (2003).

Remarks about the "Rhťtorique des Dieux"

Courante "La Champrť", part 2 (with double), here from the Rhťtorique des Dieux, pages 234 and 235: And this is supposed to represent the magnificent compositional quality of a Denis Gaultier ?!? Entry of Notator B, who - in my eyes - used a peripheral source to copy from. It is most likely that Denis Gaultier has nothing to do with this version. This brings us to the central theory: The entered versions do not originate from the immediate circle of Denis Gaultier and the Rhťtorique des Dieux is NO primary source for him, except for the unique specimen.

Abstract: Based on codiocological and paleographigal studies it can be determined that the genesis of the codex is quite complex and that it is most likely that the existing plans of all work cycles could not be transformed as planned. Especially the tablature entries seem to no longer pursue the manuscriptīs original concept. The version of the pieces by Denis Gaultier, which are entered in the Rhťtorique, rather hold a special position within their tradition. This results in a new assessment of the manuscript: The Rhťtorique is in its concept a outstanding example for the interaction of arts in Paris in the middle of the 17th century, however, the tablature entries cannot be regarded as especially authorized versions of Denis Gaultierīs works.

Abstract: This is an extended version of the "Remarks on the "Rhťtorique des Dieux" which deals especially with the arguments of David Buch against the article published in "Guitar & Lute" and correct Buchīs false statements. Moreover the method of the distinction between the "transmissional spectrum" and the "formulational latitude" of a piece is discussed in greater detail: The French lute music of the 17th century does not know an "Urtext". Instead, the lutenists of that time handed down a piece within a "formulational latitude", i. e. the same musical thought was formulated and written down in different ways. The first step in the presented process consists of getting to know all the versions of a piece, which were handed down - the "transmissional spectrum". Sorting out the different variants and mistakes then shows the "formulational latitude", which was open to all lutenists of that time and which should also be used by todayīs lutenists.

It is possible that the Friedrich Wilhelm Rustīs (1739 - 1796) three sonatas are preserved in full in a manuscript, which was corrupted by his grandson, the cantor of the Leipzig Thomas church Wilhelm Rust, as well as partly in a manuscript containing only the lute part of two sonatas, which was believed long-lost. Due to the re-discovery of this lute part, the author could observe the forging techniques and thus carry out a reconstruction.

The collection as a whole has hitherto been attributed to Baron. Concordances and stylistically striking features lead to the assumption that Sylvius Leopold Weiss could have composed some works. Due to our still very fragmentary knowledge new discoveries and attributions can be expected. Article "Ernst Gottlieb Baron" in MGG2, Volume of Persons 2, pages 271 - 274, Kassel 1999 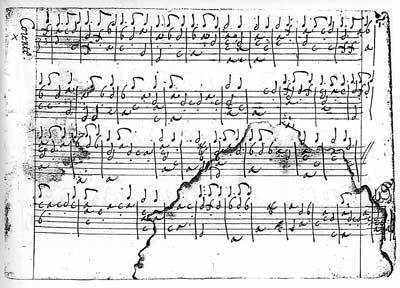 From a review in Gitarre & Laute 5/1991: "The manuscript is a copy of a lute book by "Christophorus Herold", which was produced in Padua in 1602 and has not been found to the present day. Due to the concordances, the editors at the universities of Padua and Leiden have searched to the writer of these copy modelsÖ and they really found him. A "Christophorus Herold", born in 1578 in Halle, was enrolled there. Based on this discovery, some facts and details about his life could be proved. The editors described the meaning of the lost copy model and the present copy in the following points: "1. The Ms. Herold impresses by a high independence in the repertoire selection and the formulation of known models . [Ö] 2. Christoph Herold obviously had connections to Joachim van den Hove. [Ö] 3. The Ms. Herold from 1602, respective the copy model of Christoph Herold from 1598 - 1601 represents one of the earliest sources for many pieces." Among the 40 pieces, which have survived, some originate from Joachim van den Hove, others from John Dowland and again others could not be identified so far. The Tree edition is exemplary, the introduction very informative. One can very well imagine the moments of success the scientists experienced during their work. Arts subject can be quite thrilling!"